Murder on the Orient Express by Agatha Christie

Today the new film version of Agatha Christie’s mystery novel Murder on the Orient Express releases to the public. I’m excited to see the film because it has an all-star cast, but I wanted to read the book first, as usual! 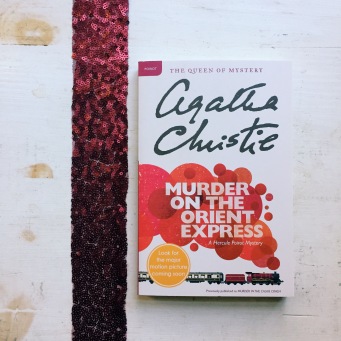 Murder on the Orient Express

Because I don’t want to spoil the book (or film) for you, all you need to know about this book is that it’s set on the Orient Express in the middle of a snowstorm. The train is stuck in a snowdrift and a murder occurs, trapping everybody onboard with the killer. The characters are interesting and unique, and the plot is full of surprises. And that is all I will say about the plot, because you’ll have to read for yourself if you want to find out more!

Agatha Christie really is the queen of the mystery novel. She includes hints and red herrings alike that add to the suspense and complexity of the plot. Hercule Poirot, the detective, is also intriguing–a sort of Sherlock Holmes without the emotional baggage or opium problem. I’m 85% sure that I have read this novel in the past (I went through a pretty major Agatha Christie phase in middle school), but there’s this 15% of me that keeps thinking If I’d really read this book in the past, wouldn’t I have remembered the amazing ending? The whole time I was listening to this book on Audible, I was racking my brain to try and remember who the murderer was, and when I got to the end of the book I was still completely surprised. I’m not sure how this will translate to going to see the movie, as now I definitely do remember who the killer is, but I’m excited nonetheless.

If all of this isn’t enough to entice you, the audiobook version of this novel is SUBLIME. It was one of those can’t-stop-listening-don’t-want-to-get-out-of-the-car audiobooks. The narrator is none other than Dan Stevens of Downton Abbey and Beauty and the Beast fame. Stevens proves himself as a formidable voice acting talent in this book, and his interpretations of each character are spot on. He also narrates an Audible version of Frankenstein and Agatha Christie’s And Then There Were None, so check those out, too!

If you go see the film this weekend, stop by and let me know what you think! I’m sure I’ll share here once I get a chance to see it.

← Everyone Brave is Forgiven by Chris Cleave
2017 Poem-a-Day Challenge: Week 2 →
Join 536 other subscribers