A few weeks ago I shared some science books that were perfect summertime reads, and one that I listed was The Man Who Mistook His Wife for a Hat by Oliver Sacks. Well, I’ve finished reading it, and it’s time to share my review!

First, a little background on the author. Oliver Sacks, born in 1933, was a very well-known scientist and writer. He died in 2015, so you might have heard his name mentioned around that time. The Man Who Mistook His Wife for a Hat is probably one of his better known books, although his most famous work is Awakenings, which inspired the 1990 film by the same title that starred Robert DeNiro and Robin Williams. 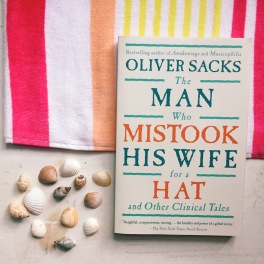 This book was not my first foray into the world of Dr. Sacks’ writing. I read his book Musicophilia in 2014, and I enjoyed it quite a bit–it was all about how music affects our brains, with a specific emphasis on disorders that somehow relate to our human capacity for enjoying music.

The Man Who Mistook His Wife for a Hat delves into some of the same territory–mainly excesses and deficits in brain function that Sacks observed over the course of his career. The title comes from one of the clinical stories in which a man was almost completely unable to recognize faces and objects. When he left the examination room, his wife asked him if he’d like to put on his hat and he reached for her face, believing her to be his hat.

One thing I loved about this book is how much information Sacks includes about the brain. I always think it’s funny when I read a book about the brain to realize that my brain is learning about itself (That may be the nerdiest thing I’ve ever written on this blog). This one will definitely enlarge your knowledge of what the brain is capable of. It will also make you thankful that you possess a normally-functioning brain. Some of the clinical stories in this book are very sad and touching. They made me thankful for my healthy brain!

The biggest complaint I have with this book is the writing style. While the style is exactly what you’d expect from a neurologist–long words, lots of complex clinical definitions, etc.–there are some moments of lovely and descriptive prose. In my opinion, there aren’t enough of those moments. While I learned a lot about these patients’ disorders, there’s no way I could express to you now what their clinical disorders were called or what parts of the brain were damaged or affected. I can only relate the surface level, “weird” details of their conditions.

If you’re okay with wading through some technical terms, this might be a good book for you. It’s relatively short, and each chapter stands more or less on its own. If you’re looking for science in layman’s terms, think about reading something by Bill Bryson or one of the other authors I mentioned in my “Science of Summer” post. Either way, I love branching out from fiction into the world of science writing, even if it’s just to learn some crazy-cool stories and then go right back to reading the classics.