To a God Unknown by John Steinbeck

Last year I read East of Eden by John Steinbeck, and I liked it so much that it made my list of favorites from 2016. The fact that I loved East of Eden so much is only one of the reasons I picked up To a God Unknown this summer. Another main reason that I picked up this novel is that I’m researching the Great Depression for my capstone project, and I’ve read that it’s good to read what was being published during the time period you’re researching. I’ve added several other Steinbeck novels to my list, so don’t be surprised if you see more reviews of his books on the blog in the next few weeks. It might just be the summer of Steinbeck! 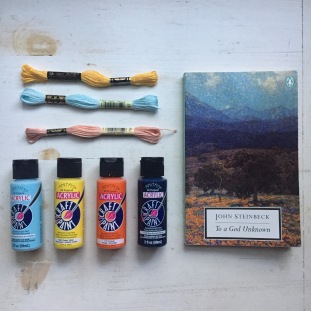 To a God Unknown took Steinbeck five years to write, even though it’s only a fraction of the length of East of Eden or The Grapes of Wrath. After reading it, I can see why. The book is full of symbolism, mythical images, and Biblical allusions–it’s a finely-woven tapestry of many different influences. The language is also stunning, and the descriptions of the characters leave you feeling like you’ve known them forever.

Something that impressed me about East of Eden was Steinbeck’s ability to create characters who seem larger-than-life; they’re almost mythical in their actions and emotions. He does the same thing in this novel. The main character, Joseph Wayne, goes west to start a farm. When he receives news from back east that his father has died, he comes to believe that his father’s spirit has inhabited a large tree at the center of his property in California. His strange belief leads him to act as if the tree was a god or an idol of some sort. His brothers come to join him after their father’s death, and they all respond in different ways to Joseph’s new habits and strange practices. Joseph’s new wife, Elizabeth, and his sister-in-law, Rama, also play large roles in the story.

And if you’re thinking that a story about Joseph and his brothers sounds familiar, it is! The book has a lot of similarities to the story of Joseph from Genesis, with the notable exception that Joseph Wayne is a twisted version of Joseph from the Bible. Instead of saving his brothers, he causes their downfall. I don’t exactly sympathize with Joseph Wayne, but watching his descent and the tragedy that overtakes his family because of his flaws was almost like reading a Shakespearean tragedy. And we all know how I feel about Shakespeare. 🙂

What gives the story rich texture is all of the creepy imagery Steinbeck weaves in whenever he discusses Joseph’s newfound religious practices. By the end of the novel, Joseph believes that he is the source of curse or blessing on the landscape. I’ve read a few different bloggers’ thoughts about the ending of the novel, and it’s hard to pin down what Steinbeck actually meant. To me, this book is about the dangers of idolatry, and it shows the quickness of humans to find something, anything, to worship.  Now, whether or not that’s what Steinbeck was aiming for, I can’t say!

What I can say is that To a God Unknown made me think long after I finished reading it. I’ve come to discover that those are my favorite books–books like Tess of the d’Urbervilles, East of Eden, Les Miserables, and others. If you’re looking for a short Steinbeck novel, this one is less than two hundred pages long and it is (in my opinion) a masterpiece–even if it’s often overlooked in favor of The Grapes of Wrath or Of Mice and Men. Have you read any of Steinbeck’s other novels? Let me know in the comments which I should tackle next!

“Taking a new step, uttering a new word, is what people fear most.” #dostoyevsky
Book 9️⃣ of 2020: Mythology by Edith Hamilton. I listened to this classic on @audible, and really enjoyed it! The way Hamilton summarizes and paraphrases classic source texts is engaging and informative. Plus it made me really crave some Percy Jackson! I have a feeling book 10 or 11 of this year may just be The Lightning Thief! #bookstagram #mythology #audible #amreading
“Eva wondered within herself what good the tiny Elves could do in this great place, but she soon learned, for the Fairy band went among the poor and friendless, bringing pleasant dreams to the sick and old, sweet, tender thoughts of love and gentleness to the young, strength to the weak, and patient cheerfulness to the poor and lonely.” #LouisaMayAlcott #Flowers #FlowerFables #LittleWomen
Hoppy Saturday!
Happy Valentine’s Day! I hope you are celebrating with someone you love. Speaking of love, what’s your favorite love story? #valentinesday
Could I bee any more ready for spring? 🐝
A little HP to get you through the week. #harrypotter
Unpopular Opinion: stop remaking Emma and give us the modern cinematic Persuasion we deserve, Hollywood! #janeausten #persuasion #emma
Book 8️⃣ of 2020: 1984 by George Orwell. This was my first time making it all the way through 1984, and boy was it grim/thought-provoking. I’m glad to have finally finished it, but I don’t think it is one I will be revisiting anytime soon! ⭐️⭐️⭐️⭐️ #Orwell #1984 #Bookstagram