Well, it is with great joy that I announce that I’ve finished my fifty books for 2016! And since this weekend is such a huge football weekend, I thought I’d combine two of my favorite things: Shakespeare and College Football. I’ll admit, it’s an unlikely pairing. 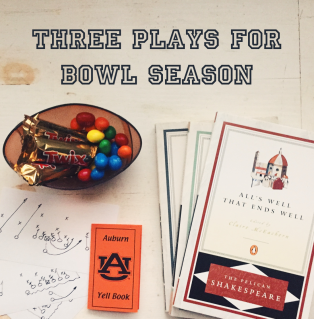 Before we begin, a note on Shakespearean comedy: Shakespeare’s idea of comedy is slightly different from ours. Elizabethan comedies featured love stories that ended happily–usually in marriages for the unmarried characters. They also involve tricks, cases of mistaken identity, and clever wordplay, which makes them difficult to summarize. They are very different from Shakespeare’s tragedies. For one thing, in the tragedies almost everyone dies. The tragedies also work in the same way classical Greek tragedies did–the terrible events of the play help the audience purge certain emotions (typically fear and pity), which results in a type of catharsis. The comedies, on the other hand, are more for entertainment than cathartic education.

So, all that aside, here are the three Shakespearean comedies I read to close out 2016:

I really enjoyed As You Like it, which features two sets of brothers who don’t treat each other in the most brotherly way. The main characters, Orlando and Rosalind, fall in love with each other at first sight, but when Orlando flees his villainous brother and Rosalind is exiled from court, they think that they’ll never see each other again. Rosalind disguises herself as a man in order to stay safe, and through a series of comic events, the two finally manage to end up together.

This play also features the most singing of any Shakespearean play, some really bad poetry, and this quote, which I love:

And this, our life, exempt from public haunt,
finds tongues in trees, books in the running brooks,
sermons in stones, and good in everything.

Have you ever seen that old Amanda Bynes movie She’s the Man? You know, the one where Amanda Bynes’ character dresses up as her twin brother to go play soccer? Well, if you have, you’ve basically read Twelfth Night. Twins Viola and Sebastian are separated during a shipwreck, and each assumes the other is dead. Viola dresses up as a man (surprise, surprise) and joins the court of Duke Orsino, whom she promptly falls in love with. Duke Orsino is in love with Olivia, who will have nothing to do with him, so the Duke enlists Viola (disguised as Cesario) to try and convince Olivia to give him a chance. Olivia then promptly falls in love with Cesario. It’s not until Sebastian arrives in town that everything is resolved. Twelfth Night was probably my favorite of the three plays, because it seems like the perfect Shakespearean comedy. Everyone is falling in love with the wrong person, and there’s a guy named Malvolio who shows up in yellow tights to try and woo Olivia. I highly recommend this play if you’ve never read Shakespeare before–it’s relatively accessible, it’s definitely enjoyable, and if you can keep the characters straight you’re set!

All’s Well that Ends Well was my last book of 2016 (fitting, right?). This comedy was interesting to me mainly because, while it fits the mold of the Shakespearean comedy, it’s different. This play offers more moral and philosophical insight than the others. It ends in a marriage, but the heroine’s last lines are

If it appear not plain and prove untrue,
Deadly divorce step between me and you!

So clearly, if the comedic heroine of a play is threatening “deadly divorce,” there’s been some pretty serious stuff happening. The main characters of this play, Bertram and Helena, are paired up in an arranged marriage–sort of. Helena, who has saved the life of the king, asks to marry Bertram, with whom she is in love. Bertram does not want to marry Helena because he is a snob and he thinks that she is “beneath him” socially. He swears that he will never be a true husband to her until she can give him back a ring he never takes off and presents him with a child that belongs to him even though they never consummated their marriage. The main conflict of the play is Helena disguising herself to seduce her own husband to win his affection. It’s a strange play, and at times it reads more like a tragedy than a comedy.

So there you have it–three plays to get you through bowl season. Thanks for following along this year as I’ve journeyed through my fifty book goal. I can’t wait to hear from you all in the new year as you #readmore17 and take part in the Book Fifty Reading Challenge. Don’t forget that you can print your checklists here.