It’s Saturday, and I’ve been away on a retreat with my students, so today was filled with a lot of napping. Tonight I’ll have to buckle down and work on some of my grad school assignments, but first I thought I’d catch up on the blog!

This evening I have two Harry Potter-related items to share with you. The first is my review of the long-anticipated play Harry Potter and the Cursed Child. 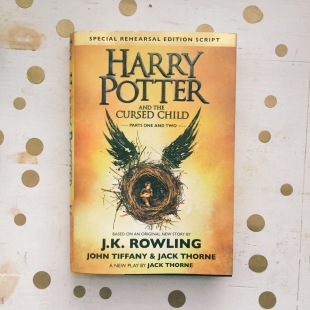 Harry Potter and the Cursed Child is the eighth installment of J.K. Rowling’s Harry Potter series. The play picks up nineteen years later, as Harry’s children are off to Hogwarts. I was excited to read this play because I do love the whole Harry Potter universe, but after reading it and thinking about it for a while, I find that I’m more disappointed than excited about this latest Harry story. I’ll try to get through this without any spoilers, for those of you who haven’t read it yet.

On the positive side, this play is very readable, and the characters are familiar enough, even though they change quite a bit over the course of the action. It was nice to see them in print again. Also on the positive side, this play was very emotional and it had some really great themes and messages about fatherhood, family dynamics, and showing grace to your family members, even when they’ve angered or disappointed you. It’s also very engaging, and I pretty much read it in one sitting. It’s a page-turner for sure!

On the negative side, I can’t quite figure out why J.K. Rowling needed to write this play. She opens up a lot of questions and issues that I considered resolved after the last Harry Potter book. She also seems to create conflict where there doesn’t need to be one. Some of the characterization and interaction between characters fell flat for me, and a lot of the plot felt forced. It felt a bit like I was reading fan fiction and not a genuine addition to the stories I love. I would rather see Rowling create completely new additions to the wizarding world–like the new Fantastic Beasts and Where to Find Them film due out this fall–than try to tack on extra endings to Harry’s story.

Another note on this new story: for me one of the most engaging and entertaining aspects of the Harry Potter universe is the atmosphere and the entire world Rowling so skillfully creates behind her characters. Because this was a play script and not a novel, you don’t see that world come through. I’m sure seeing the play live on stage would help with this dilemma, but it’s definitely something I missed as a reader.

I guess it comes down to this: I thought Harry’s story was over. I was happy with the resolution of the original series, and I didn’t feel the need to “check in” on him 19 years later to see how he’s doing. That being said, I did appreciate some of the messages of the new play.

Switching gears a bit, here’s a Harry Potter book I thoroughly enjoyed: the audio book version of Harry Potter and the Sorcerer’s Stone.

If you’re looking for an audiobook that is charming, entertaining, and completely well-done, you can’t look any further than this one. Jim Dale, the narrator, is splendid, and I felt like I was watching the movies/reading the books all at once. I can’t wait to download the next one in the series and see if it’s just as excellent.

So there you have it! Hope you have a magical weekend!