In the heat of the summer, there’s nothing better than settling into a cool movie theatre seat with popcorn and a drink. One of my new favorite things is to go see theatre broadcasts at the movie theatre. I saw one last fall–Benedict Cumberbatch in Hamlet–so I was excited to see that Kenneth Branagh was releasing a new adaptation of Romeo and Juliet starring Richard Madden and Lily James, Disney’s live-action Prince Charming and Cinderella, respectively. 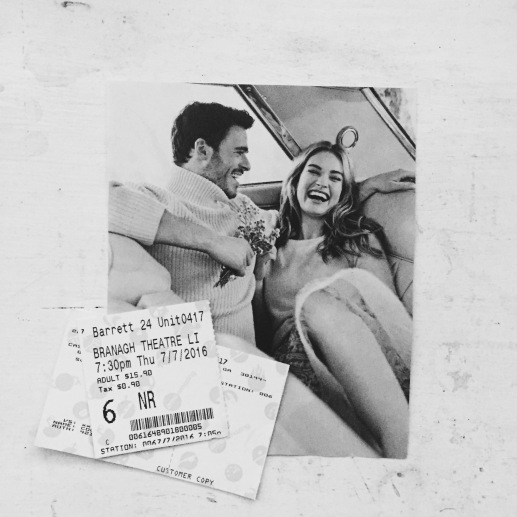 There are typically two ways to play R&J. Some performances play up the youthful, teenage aspects of the play. Juliet is typically silly and girlish, and Romeo is your typical starstruck teenage boy.  The play comes across as a tragic accident that happens because the two main characters are too young to know what they’re doing. The other option is to go completely star-crossed, and play up the romantic, doomed aspects of R&J’s relationship.

Branagh’s version contains the best of both worlds, and on the whole I liked it. Below you’ll find my bulleted review of the play.

What I (mostly) liked:

So, on the whole, there were more “pros” than “cons.” If you get the chance to see this film or if you’re lucky enough to see it live at the Garrick in London, let me know what you think! I’ll leave you with these words from the play:

I pray thee, good Mercutio, let’s retire;
The day is hot, the Capulets abroad,
And, if we meet, we shall not ‘scape a brawl;
For now, these hot days, is the mad blood stirring.

I always think of these lines in the dead of summer–it’s hot, and it seems like everyone is up in arms about something. Whether it’s 1950’s Italian gangs, teenage lovers, or road rage in Atlanta traffic, stay cool and keep reading!